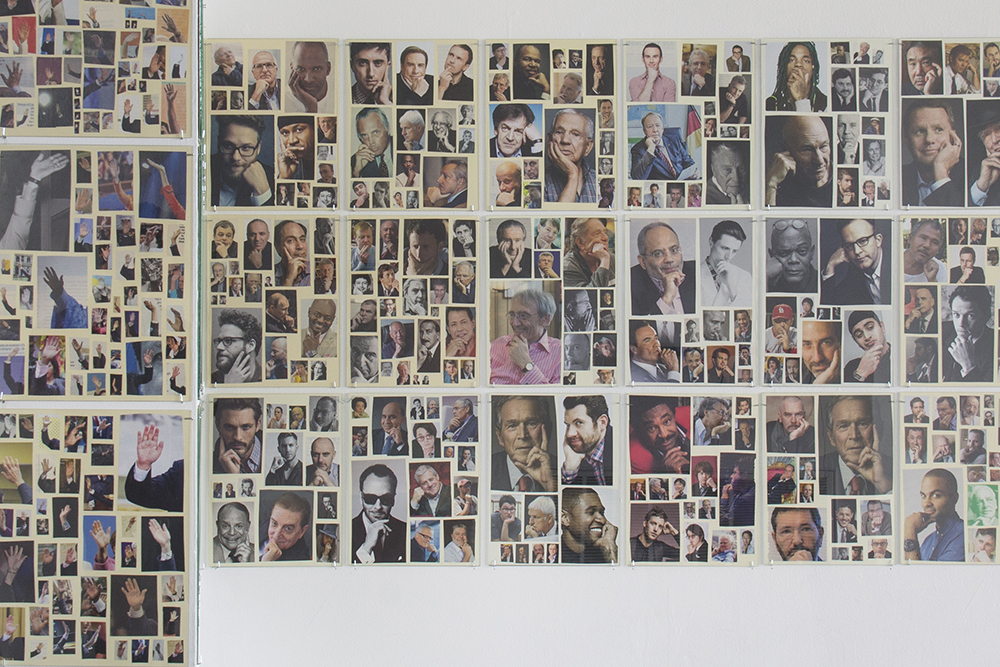 In printing, a “full bleed” refers to an image printed across an entire page, up to and beyond the edge of the paper. To create this effect, printers must include a border which will then be sliced off, either by hand or machine, never to be seen by the viewer. The resulting image has been cropped, even though it may appear whole.

The crowd was still visible a year ago but slowly, it vanished. You had asked for my help in the studio and I gravitated to a work that you had just started on. Between Solange’s new record and secret cigarettes I washed off my hands and lips (to no avail), we took turns blackening the bodies of strangers with a felt tip pen. A two-page sea of limbs reaches out to the same source. A football game or a Rugby match? Every single hand and arm is a pale white. You decide to keep the accompanying text, written in Russian. It translates to, “An Avalanche of Support.”

It could be assumed that the more information we have regarding something, the better we can understand it. With a sculpture or a painting for example, the viewer can make connections, relate to imagery one might have experienced in their own life or have seen elsewhere. A title can reveal who someone is or a particular event being depicted. That being said, what isn’t being shown can also play an important role.

It is this veiling of information that Adam Milner harnesses in many of the works in Full Bleed. Through isolating, cropping, masking, layering and arranging his archives, new connections are made from magazine pages, pop songs and a build-your-own tombstone generator. Through these processes, an index comes into focus.

The limbs and their owners are no longer at the sporting event they once were, now covered in black ink. We’re not in the same place either. Now, we live together and you isolate new images with colors custom mixed for you at the hardware store down the street. You have your very own blue, like Yves Klein. You actually have two blues, a bright periwinkle and an indigo, along with a cream you call white and a grey you call newspaper. They sit next to our toaster and electric bills as you outline falling rose petals and confetti.

Removed from their original context, the images in Full Bleed transport me back to Sundays staring at stained glass windows of saints and martyrs as Catholic priests droned on. Saint George with his sword and dragon. Saint Sebastian and his arrows. Lucy and her eyes. Without their props, their divinity is stripped away in their depictions. As Adam removes the figures, backgrounds, and text from the source material he’s collected, the viewer is left with only the images’ iconology.

By amputating powerful political leaders, Politicians Waving acknowledges the telling implications of body language. In 2016, we watched a presidential republican candidate jerk others into invasive hugs and handshakes and a viral video of Hillary Clinton practicing how to avoid the man’s touch. Controlling, aggressive, fearful, Politicians Waving parallels hand gestures found in Catholicism, often depicting a deeper allegory or predicting what’s to come with the bend of a wrist or pointed finger. Horrifically, the men and women depicted in Politicians Waving have the power to do the same with the flick of a pen. Perhaps their most most dangerous weapon, these hands sign orders behind closed doors and pacify citizens in public.

In Men Thinking, almost none of the imagery has been altered. Portraits of men rest their heads on fist or framing hand as they ponder into the camera or distance. Unremarkable on their own, when amassed together their poses takes on a bizarre quality that demonstrates how societal power dynamics are portrayed in a male dominated world. When Moons, Masks, Politicians Waving and Men Thinking mingle together and wrap around gallery corners, the combined work takes on a hieroglyphic nature. Moons for example, appear romantic, cinematic, even spooky on their own, but become about ownership and colonization when next to Politicians Waving.

While Adam removes content from what he collects, he also adds something through color. Muddy greys and pale beiges paired with falling rose petals or confetti evoke thoughts of loneliness and hollow gestures. Two posed hands just about to embrace (Touch) and the perfect pair of eyelashes (Untitled (Eyelashes)) sit frozen in synthetic pools of blue and forest green. The unnatural colors denote the artificiality of the advertisements lying beneath the enamel paint. Black ink swallows up hands being sworn into office and fans at a rugby match, sending their owners to a fathomless void.

As Adam traces these forms with paint or blades, we must with our eyes. There is a particular magic in the confetti works that, through layering, reveal more about the printed matter beneath. In Confetti (Memories of Philadelphia May Long Endure, VARIETY, August 2, 2016, page 18) and Confetti (Foy is a young Queen Elizabeth II, catapulted into power when her father, King George VI, suddenly dies. The Hollywood Reporter, November 11, 2016, page 96) pigment piles up to trace graphic elements and words from the original magazine page. By covering the text, character by character with countless layers of paint, we somehow see more of what’s beneath than we did before. Conversely, thinly painted color applied again to Confetti (Memories of Philadelphia…) and Petals (NUR DIE LIEBE ZÄHLT, FOCUS 51/2014, page 83) both act more as fog than veil, allowing the viewer into depictions of Hillary Clinton in celebration or Angela Merkel as she spills a handful of rose petals.

I’ve seen you collect many things and watched as others collect them for you. An owl figurine, lock of hair or even a wisdom tooth will arrive in the mail from time to time. A friend will give you a stack of magazines they no longer want. These collections swell and shift. They move around your studio and our home. Some are small and concentrated, both in volume and mass. Others are vague, with categories like “Images That Prick”. Some are on display. Many only exist digitally, in clouds and drives.

I collect and sort too. I recently organized our medicine cabinet and discovered we have four different tweezers and at any given time, seven to nine different Chapsticks. I find them around the house or in your pockets and return them to their new home. Funny how when you search for things that are the same, you end up noticing how different they all are. Gradually, you undo my collection by dispersing them back into jeans, jackets, counters and drawers. Is it still a collection if they’re not together anymore?

Adam refers to his process of collecting as an “analogue search engine.” There isn’t a shortcut or algorithm. Rarely purchased from newsstands either, Adam gathers his material from libraries’ discarded magazines, recycling bins and the occasional friend who works in fashion. FOCUS, L’Express, Bloomberg Business Weekly, Stern, VARIETY, The Hollywood Reporter, Jeune Afrique. The way in which Adam collects and archives points to how categorizing and compartmentalizing can obliterate an original meaning or examine it closer through repetition. Segregating something into a category doesn’t simplify these topics but rather, complicates them further.

In Baby Archive and Ohh Archive, the classic pet name and exclamation has been collected and orchestrated to play in grating succession. Both archives convey a spectrum of emotions and demonstrate the versatility of  “baby” and “ohh”.  Long, whaling “ohhs”  like Lorde’s or Stevie Nicks’ stand out and feel genuine while others feel like filler. Lana Del Ray’s “baby”s sound like their own language as they pour out, jab, cry, screech and shout in a wide array of forms. Adam counts 93 “baby”s in her extended debut album Born to Die: Paradise Edition and because he arranges the archive alphabetically by artist, we hear them all, one after another. Extracted and amassed, the two works become unbearable to listen to after a certain point. 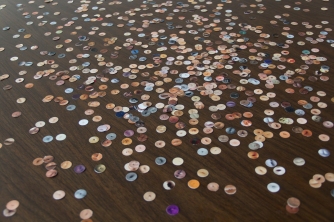 Started in 2014, Belly Button Archive now consists of close to a thousand scars, each hand punched from periodicals. They’ve been installed as a grid, a single row, and under glass in previous exhibitions but today they lay scattered across a low, circular pedestal, mirroring the Confetti works that flank it; party long over. When compared to Politicians Waving, the belly buttons are anonymous and unattached to any particular demographic. Of all the works in Full Bleed, Belly Button Archive most closely connects to Headstone Online Designer Decisions. Both presenting as sculpture, Belly Button Archive marks the beginnings of life and as Headstone Online Designer Decisions marks the end.

We walk through the Homewood Cemetery and both of our phones are dying. You ask to borrow mine to document headstones of interest. (I still need to send those). We sneak into a mausoleum and find a door labeled “Flower Room”. It is locked. Outside the room, artificial flowers collect dust in evening light filtered through stained glass windows. We borrow a bouquet from a window sill that doesn’t seem meant for anyone in particular. You take a photo of me with the flowers. I take yours.

In 2015, Adam designed his own headstone, as seen in Headstone Online Designer Decisions, something not many people think to do while they’re alive. The task, often left to someone else, will serve as the owner’s final portrait. A medium is chosen, graphic elements can be added and even a title must be decided upon, not unlike any other monument. Why is it that others have the final say of who we are, and what does it mean to take that decision into our own hands?

A tombstone is not unlike the Eiffel Tower or Statue of Liberty when considering the object as place. We go to visit these objects for their physical appeal, whether that be their architecture or the remains of a loved one lying beneath. However, so much of these places’ tangible qualities have little to do their importance. These landmarks are representative of cultural ideas and histories, people and their memories. To embody an idea through an object or image is undoubtedly symbolic.

At the opening you shatter glasses filled with red wine. Today, you wear a shirt dyed in your own blood.

This essay was also published on Entropy Magazine which you can read, here.

Full Bleed presents excerpts from Adam Milner’s obsessive collections of images pulled from thousands of magazines. Through the act of isolating, cropping, masking and arranging, Milner’s personal archives reveal new connections through seemingly ordinary images one might otherwise flip by in a magazine or overhear in a pop song. These images are not merely hacked or ripped from media publications, but rather, painstakingly cut with a sharp razor blade or delicately outlined in a custom color.