What does the word identity even mean? Is it our most public self or our most private? Is it defined by others, inherited, or self-made? Can I have more than one? What happens when I start to become close to someone else? How do I respect another’s identity? How do I share my own?

Identity is undeniably connected to intimacy, the act of sharing one’s self with someone else. Feeling acknowledged by others, on any scale, can feel vulnerable, bizarre or embarrassing at times. The queer identified artists in HICKEY acknowledge these feelings and have learned how to physicalize aspects of themselves through their work. Be it the correct pronoun, a whispered secret, or a deafening protest, there is power in presenting oneself to the world and feeling the sting of eyes watching. These artists return the gaze.

It is striking how many similarities Kyle Vu-Dunn’s paintings share with the twister scene in the Wizard of Oz. Seemingly “safe” within the confines of her bedroom, Dorothy is struck by a window pane that has been blown off its hinges by the tornado raging outside. After falling dramatically onto the bed, Dorothy tosses in and out of consciousness as her house is picked up off the ground, now on the way to Oz. It is here, between reality and fantasy, that we peer into the rooms of Vu-Dunn’s paintings. His odalisque male figures—almost always self portraits of himself or his husband—are beautiful. At times they are almost too beautiful in the way they twist and bend, features exaggerated by the carved panels Vu-Dunn molds underneath and then paints over. His images are idealistic (borderline idolatrous) but we are always reminded they come from the everyday, be it a disheveled bedhead or a house plant spilling into frame. Considering framing, Vu-Dunn directs the viewer’s eye like a spotlight from work to work. We spy on the couple in Bad News II and Lover’s Stand, adjust our focus from Vu-Dunn’s own perspective in Blue Crush and are lured  ourselves in Watering. By shifting these perspectives, Vu-Dunn acknowledges the complexities of being in a committed queer relationship; for many, a balancing act between what we have and what we want.

While Paul Peng will deny that the characters in his work act as self portraits, there is no denying their deeply personal connection to his life. Peng’s imagery morphs out of DeviantArt culture in all of its personae-building, furry-fandoming, animé-aping glory. By synthesizing these roots with his technical drawing skills and a love-hate for zombie formalism, Peng’s lines shift and swell dramatically from work to work and parallel the process of constructing one’s own self, whether as a persona, fursona, or a post-physical field of marks. Works like American Evening, Honest…!, and You and the Ocean fully render Peng’s figures into young adult aspirations, placing them into ranch house pools, selfie setups, and bootleg Balenciaga caps. Conversely, works like 2017 Body and I Can Be Your Greatest Dream……..Or Your Worst Nightmare fold these same figures into deconstructed shapes and blobs, pointing towards a world where there’s no hierarchy between a mark and a monster boy. Peng’s drawings portray the complicated, the grey, and the fuzzy.

The first time I walked into Curtis Welteroth studio, Story of the Eye by Georges Bataille beamed back at me from their desk. Story of the Eye is one of the most erotically concentrated texts ever to be written; impressive, considering it was published in 1928 and under 150 pages. If you haven’t read it, I will not ruin it for you, but just know that you will never look at eggs the same way again. If you never thought an egg could be erotic, what about chocolate or oysters? These are just some of the innuendos Welteroth conjures up and reconfigures in HICKEY. Through hyperrealistic paintings and sculptures, Welteroth examines the bizarre semiotics we as a society (and for them personally) have come to associate with sexuality and gender. From a direct reference to Moby Dick’s Chapter 94 “A Squeeze of the Hand”, Untitled (Chapter 94), to their more subliminal Arrangement works, Welteroth is simultaneously referential and irreverent, much like how memes evolve over time online. In between the camp, the viewer is presented with more obscure images: a jack-o-lantern, Garfield the Cat, Jesus (!?!), which blur the relationship between symbol and context even further, and keep the images from feeling masturbatory.

Justin Woody and Max Adrian create the largest works in HICKEY and serve as architectural anchors to ground the exhibition, an intentional choice considering their materials. Through medium, Woody tackles arguably one of the oldest forms of self expression: hair. By weaving together synthetic and natural strands with found objects, his work pays tribute to his muses, his joys and his pains. Through these repetitive processes, he undoes the knots surrounding dated gender roles and queers the action of weaving itself with works like Wild Thots and Jungle Fever. In the hands of Lorna Simpson, Ellen Gallagher, and Frida Kahlo, hair is a conduit for culture, race, gender, and community. For Woody, the same themes run true but operate under the lens of black boy queerness. Adrian, also a fiber based artist, similarly exploits his medium’s history though subversion. Pieceworking (sewing) together pleather, faux-fur, velour, fringe, and chains, his work is dressed to get down. For as obvious as Adrian’s materials seem to reference, the shapes and patterns he constructs feel much more slippery in their abstractness. Baby Blue Pucker Punch, for example is just obscure enough to feel both like a medieval mace and a squishy disco ball. Sex doesn’t have to be one or the other. 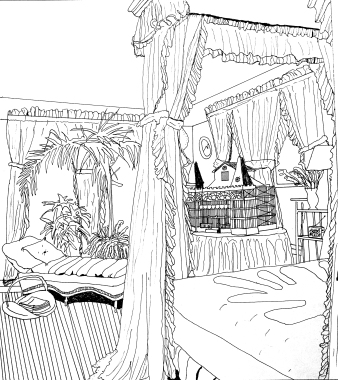 Stephen Grebinski’s drawings remind me of what it’s like to return to my own childhood bedroom. Pinned and taped to the walls of the gallery as if by a moody teenager, they cause me to feel the twinges of embarrassment that come with nostalgia. At one point I replaced an Aaron Carter poster above my bed with handwritten lyrics by The Used. Why is it so important to us to package and display ourselves so literally? “This is me!” Who is that for? Sourced from old Sears catalogs and 70s design magazines, the rooms Grebinski crudely traces feel both personal and impersonal at the same time. You won’t find a single family photo or favorite record, but a ruffled 16th century bed canopy still says a lot about a person. His lines reveal a tenderness in how they start and stop, wobbly in places and more confident in others. Can you tell which rooms were originally decorated for a man? A woman? A family? Dream homes turned haunted houses, Grebinski’s work points to the veil of dust that gathers over not just objects in spaces but the people who inhabit them too. Wiped clean by obliterating details and leaving only coloring page linework, we are left to wonder ourselves what to trash and what to preserve.

This essay was included in the show’s exhibition catalog seen here. It was risograph printed by Jimmy Riordan and designed by myself. To obtain a physical copy, contact me.

HICKEY irreverently presents tales of intimacy and identity through the works of six queer men. By using traditional mediums such as paint, paper, pencil and fiber, then subverting their applications, the artists in HICKEY simultaneously make light of and shine light on, the absurdities of finding one’s self and then sharing with another.